In 1966 when we moved there, the town of Oroville was in the final stages of an employment boom centered around the construction of Oroville Dam, the Edward Hyatt power plant, and the beginning of the California State Water Project.  Proposed in the 1930’s, developed and financed in the 1940’s, with construction beginning in the 1950’s and continuing through 2007, the California State Water Project (SWP) was, as such things go, really really REALLY big.

But I was 5.  I didn’t know about stuff like that.  At the time all I knew was that there were trains – big long trains full of rocks – that passed near our house every hour of every day.  They were carrying material to the largest earth-fill dam the world had ever seen.

I thought the trains were pretty neat.

There were lots of things that I didn’t know at that time.  Like the fact that the big lake that was going to develop behind that dam was coming at the cost of entire rural communities that lived in places where its waters were going to be, and that the government was in the process of relocating those people – whether they really wanted to go or not.  When we arrived in Oroville there was still (barely) a town called Bidwell’s Bar.

This was part of the price of getting water to urban centers and agribusiness.

Another thing that I didn’t know, that I don’t think anyone knew at the time we pulled up in our moving truck to 564 Yolo avenue, was that Oroville gets hot in August.  Like over 100 degrees hot.  I was from San Francisco – the temperature was approaching hell for me.  We spent the first week lying in in front of the coolers during the day and unpacking & setting up house during the night.

Oroville was also very white.  And very conservative.  I don’t think my mother quite knew that when she got there.

I was new.  I wore an eyepatch.  It was therefor inevitable that I was going to get into trouble with the other kids in school.  And I did.  But of course I also made friends over time the way children do.  There was a chant that I learned on the playground.  It went like this:

“Kill that nigger and save that white!”

I didn’t know what a nigger was.

Seems crazy, yeah?  It was 1967 – there were race riots in Detroit, Tampa, Cincinati, Newark.  People were dying in the streets.   And here I was tromping around the playground at Nelson Avenue School talking about killing niggers.  I actually thought they were North Vietnamese, with whom we were at war.  There were no black children in my class.  There may not have been any black children at the school (though it was Kindergarten – 4th, and classes didn’t mix all that much so I can’t be sure).  “Niggers” were not part of my life experience.  But there I was getting indoctrinated like a good little white boy.

Eventually my mother found out.  She explained things to me.  She told me what a negro actually was and did her best to get the complex idea of discrimination and civil rights and equality into my brain.  Since in my mind the civil rights movement was tangled up with the Vietnam war she had to explain that to me too.

It was very confusing.  But I came away with it with a very basic understanding that

So I stopped.  I stopped doing it.  And because I stopped doing it I got beaten up a few times and called a “nigger lover”.  This wasn’t systematic.  The level of racism at Nelson Avenue School was very casual and sporadic.  It happened a few times and then everyone moved on with childhood life and the whole thing was largely forgotten.  My mother did her best to try to teach me about equality, and when I visited my father in San Francisco he started taking me to peace marches.

But there was an incident that came from this that I think explains a lot about what happened subsequently. 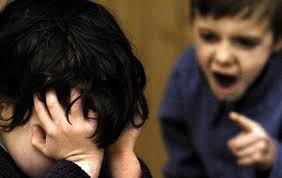 I got beaten up a few times.   In particular there was a kid who used to beat me up on the school bus going home.  I would arrive at home black and blue and crying, much to the consternation of my Aunt Gertrude.  After this happened a couple of times Sibyl sat me down and asked me what happened, and I explained in my little kid way that there was a mean kid on the bus who was calling me names and hitting me.  Sibyl, dauntless, fearless Sibyl responded promptly with “Well, if he hits you, hit him back!”

“But mother,” I responded, “that would make another child cry!”

But there it was in my early life.  I was conflict averse.

Where had it come from?  Was it from watching my parents scream at one another?  Was it from watching Preacher Bear burn?  From being made fun of for the eye patch?  From reading The King, the Mice, and the Cheese?  Was it just because I was a sickly little kid who discovered that conflict was not to my advantage?  I don’t know.  But writing this I know that it has carried on into my adult life, with consequences for views of discrimination and “other”ness that have followed me all the way to the present.  But that, of course, is further along in the story.

What is important here is that because I was conflict averse, I could easily have taken another path.  The easy path, if casual racism had been simple and accepted.  If not for my mother pushing me away from active discrimination and bigotry, I could have drifted in that direction, because I had little friends who mouthed casual bigotry (did they know what they were saying any more than I did?  I have no idea.)  Going along to get along was very attractive to me – I didn’t want to fight, I didn’t want to argue, I didn’t want to get beaten up.  I wanted to play with my Tonka trucks and catch snakes and do kid things.  If  saying “kill niggers” had enabled me to do that without immediate consequences, I might have said it.  I wouldn’t have actually killed niggers (a job that six-year-olds are seldom tasked with in any event), but if things had been different and my friends had been doing it, I can easily see how I might have been induced to shout at niggers or throw rocks at niggers or even do mean things to niggers.

Throwing their things into a fire, maybe.

But Sibyl knew.  She had her secret, remember?  The secret that I was still years away from knowing.  And so she taught me, as a parent should do.  She was fierce.  I remember her arguing with neighbors about civil rights, and there came times when certain people were no longer welcome in our home for a time because of their views.  She started following the Civil Rights movement more closely in the news, and talking with me about it.  To a lesser extent my father and my Aunt Gertrude also helped.  My father would introduce me to black people in San Francisco when I went down for a visit – though it was difficult for him because the people he knew didn’t have children my age and so weren’t terribly interesting to me.  As mentioned above he would also take me to peace marches.  My Aunt Gertrude would mouth my mother’s stance on the matter (though I think she quietly disagreed somewhat about the whole equal rights thing) while my mother was at work.

So my family life counterbalanced the stuff I got at school, and since as I said the bigotry at school was very casual and sporadic, my family life managed to win out.  But looking back on it now, how easy it would have been for things to go the other way.