WHAT IS AN RPG THAT YOU WOULD LIKE TO SEE PUBLISHED?

First and foremost – Land of 10,000 Gods, a hack of Dungeon World set in a mythic version of the Indian subcontinent. Leaving that aside, I would have to say

It’s got so much potential – magic, horror, monsters, dead gods, non-humans, a world full of all sorts of hidden plots and lost artifacts, gray morality, good guys who are bad, bad guys who are worse, sumptuous art for illustration, and cats as playable characters! 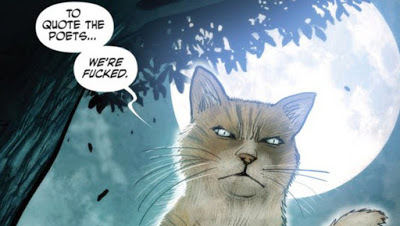 Since it is an ongoing series, it’s likely that any RPG will rapidly go off canon at this point, and it does suffer somewhat for apparently having a “chosen one” plot-line, but the world is so rich that even just used as a jumping off point it could make for a wonderful campaign.